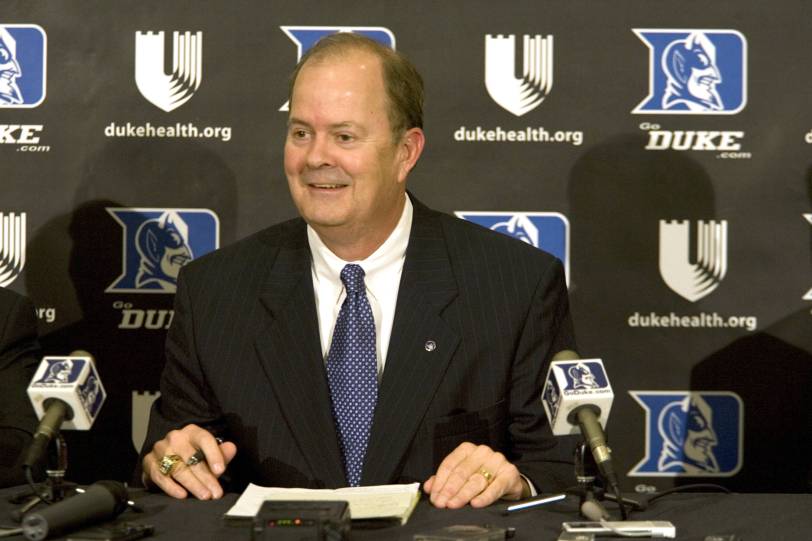 In College Football America, our preview publication, I wrote about the coaches that we believe could be head coaches in 2014. For the last time this season we’ll check back in with our list of coaches and see how they’re doing. Remember – there have been more than 20 head-coaching openings each of the last four years. So some of these guys will be moving up. This is our third update of the season and we should see some head-coaching movement as soon as next week.

David Cutcliffe, head coach, Duke: The Blue Devils are pointed toward a possible ACC championship game appearance, as long as they beat North Carolina this weekend. It’s strange to write that about anything other than basketball. Cutcliffe, who was best known for his tutoring of both Peyton Manning and Eli Manning, is one of the game’s best offensive minds and what he’s done in Durham is just plain amazing. If he wants to move up, there’s no better time.

Tracy Claeys, defensive coordinator, Minnesota: Jerry Kill’s leave of absence put Claeys in charge of the Golden Gophers and he kept them pointed toward their ascent in the Big Ten. The Gophers could play in a New Year’s Day bowl game for the first time since 1962, when they went to the Rose Bowl. Claeys’ works under trying circumstances will get him noticed, especially by non-BCS schools with an opening. The question is whether he wants to run a program. He’s been Kill’s consigliere since the pair was at Saginaw Valley State in 1995. That’s a lot of loyalty.

Larry Coker, head coach, UT-San Antonio: He has the Roadrunners bowl eligible (they can’t go to a bowl game this year as part of their transition to FBS). He sounds committed to UTSA, but Coker has led a program to a national championship and he’s shown he can build a program from scratch. That will appeal to BCS schools that are bottom-feeding in their conferences.

Bobby Petrino, head coach, Western Kentucky: He’s undergoing a little career rehab in Bowling Green, KY, as the Western Kentucky Hilltoppers are bowl-eligible. But he inherited a good team and a great player in Antonio Andrews, so success was sort of expected. The real question is whether one year is enough for Petrino to rehab his image to take over a bigger FBS job? It bears watching. There might be a needy program out there willing to take the PR hit initially for success later on.

Updates on the holdovers

Kirby Smart, defensive coordinator, Alabama: Expect Smart to get plenty of interviews once again as we watch to see if he decides to move on or stay with Nick Saban. Paid more than $1 million, Smart isn’t leaving for just any job.

James Franklin, head coach, Vanderbilt: Some are mentioning him as a possible No. 2 candidate for the USC job. He just led the Commodores to their second straight win over Tennessee. He won’t be there much longer.

Chad Morris, offensive coordinator, Clemson: Morris has proved to be one of college football’s top offensive minds. Is there a job out there that will let him prove it as a head coach? There will be no shortage of opportunities. Remember – Morris makes more than $1 million as an assistant, so, like Smart, he isn’t leaving for just any job.

Paul Rhoads, head coach, Iowa State: One of our preseason hot names, he’ll be in Ames in 2014, most likely.

Mark Hudspeth, head coach, Louisiana-Lafayette: The Ragin’ Cajuns are staring at a Sun Belt title and a third straight bowl game. I don’t expect Hudspeth to be there in 2014, especially if the SEC has an opening.

Mario Cristobal, offensive line coach, Alabama: Cristobal, working at Alabama, will get a few interviews. By the way, his old job at Florida International? Yeah the Panthers have won one game. Nice move firing this guy, FIU.

Willie Fritz, head coach, Sam Houston State: His body of work the past three seasons will keep him on the radar. The Bearkats may not have as long a playoff run this year, as they seem to have come back to the field. Fritz was a candidate for the UTEP job. A few more schools will kick the tires this year.

Tim Albin, offensive coordinator, Ohio: I think Albin stays put in 2014. The Bobcats took a step back this year and, while they’re bowl-eligible, the offense hasn’t looked as explosive as in years past.

Art Briles, head coach, Baylor: A 10-year contract extension and a large buyout if Briles bolts means the native of Rule, Texas, is staying in Waco for a while. That’s good news for all Bears fans.

Scott Frost, Offensive Coordinator, Oregon: The Ducks have taken a step back the past two weeks, but Frost will still get some interviews. If the Nebraska job comes open I think he’ll get a shot at it.

Craig Bohl, head coach, North Dakota State: Bohl is locked up through 2021 and his contract with North Dakota State is, well, interesting. Something tells me he’ll be too busy to do interviews until at least late December. But there would be no better time for him to leave, if he wished.

Philip Montgomery, offensive coordinator/quarterback, Baylor: Montgomery will get a few interviews, but like Claeys he’s been with Briles for more than a decade. So does he want to leave? We’ll see.

Cam Cameron, offensive coordinator, LSU: If a college program wants to jazz up the offense, Cameron is a great selection. NFL teams will be in competition, too.

Danny Langsdorf, offensive coordinator/quarterbacks, Oregon State: Langsdorf has been in Corvallis for 11 seasons. Is he looking to bolt or looking to take over when Mike Riley retires? The Beavers’ offensive numbers are sick this year.

Vance Bedford, defensive coordinator, Louisville: The Cards are a Top 5 defense in FBS. Bedford ought to be in play, especially if head coach Charlie Strong isn’t.

Pat Narduzzi, defensive coordinator, Michigan State: His stifling Spartans defense might just get them to a Rose Bowl. He’d be perfect for a program that needs help on defense.

Pete Lembo, head coach, Ball State: The Cards are pointed toward a bowl game once again. Lembo will get some looks.

Tim DeRuyter, head coach, Fresno State: The Bulldogs are seeking a Mountain West title. Teams may be seeking DeRuyter to fix what ails them next month.

Curtis Johnson, head coach, Tulane; Dan McCarney, head coach, North Texas; David Bailiff, head coach, Rice: Each have their merits, but Johnson is probably the hottest of the three. I mean, Tulane stunk when he got there two years ago. Now they’re bowl-eligible and a new stadium is on the way in 2014. The Green Wave needs to keep him. But can they if a BCS school comes calling?