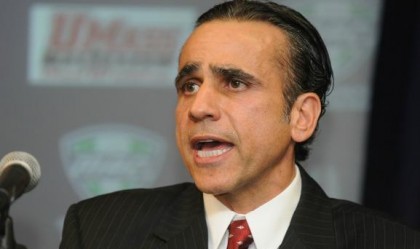 Well, at least Charley Molnar wasn’t fired on Christmas Day. Although, to be fair, the day after Christmas isn’t much better.

After two straight 1-11 seasons Molnar was relieved of his head-coaching duties by athletic director John McCutcheon. The Minutemen become the 15th FBS team to make a coaching change this offseason.

Molnar came to UMass after the 2011 season after spending time as Brian Kelly’s offensive coordinator at Notre Dame. Molnar knew it was going to be a hard job at UMass, as the Minutemen were making the transition from FCS to FBS. Plus, the Minutemen played their home games at the home of the New England Patriots in Foxborough, which is 90 miles from campus. That isn’t conducive to getting the student body to games or to creating excitement on campus.

The search for Molnar’s replacement will begin immediately. But the job will be just as tough as it looks.

UMass joins Georgia Southern and Texas as the only three open head-coaching jobs in FBS at the moment.