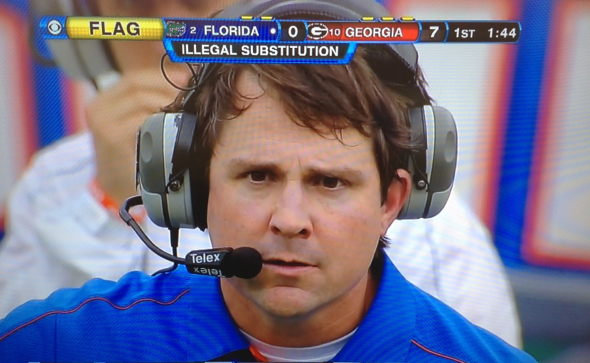 Will Muschamp of Florida.

We’re midway through the season so, as the Coaching Watch guy at College football America, I’m checking back in with our hot seat coaches from our preseason publication to see where they’re at, and adding some names that could see themselves unemployed come season’s end. Every time there is a coaching change we’ll have it here at College Football America and Postins’ Postcards.

Tim Beckman, Illinois: Everything was lining up to get Beckman a pink slip and then the Illini went off and beat Minnesota, previously undefeated in the Big Ten. Could the Illini now squeeze out a bowl-eligible season? That would certainly put Beckman in the safe category.

Bill Blankenship, Tulsa: The Golden Hurricane is 1-6. Tulsa gets SMU, so it might win one more game. I don’t see Blankenship surviving this season.

Mike London, Virginia: I’m moving to the fence on London. Virginia is now .500 and has Georgia Tech, Florida State, Miami (FL) and Virginia Tech left. They could lose all four. If they do, what happens to London then?

Dan Enos, Central Michigan: A game away from bowl eligibility helps make Enos’ case for another season. Heck, all three of their remaining games are winnable. If the Chippewas finish 8-4 he’s staying put.

Norm Chow, Hawai’i: Hawai’I now has two wins, but I only see one more win in their final five games and even that’s not a lock. His wife is doing better after two brain surgeries, so that’s great news for Chow and his family. I’m not seeing chatter related to Chow’s job security right now.

Will Muschamp, Florida: Or, I would rate this as, “Excuse me — can someone get me another seat? This one seems to have incinerated.” The heat on Muschamp right now is massive. If the Gators are not bowl-eligible for a second straight year, he’s gone. For perspective, Ron Zook — the man who replaced Steve Spurrier — lasted only three seasons, but took his Gators to bowl games all three years.

Brady Hoke, Michigan: AD Dave Brandon is doing everything he can to appease the fan base, including dropping student ticket prices by 40 percent. But Michigan has to win three of its next four games to get to a bowl game. Hoke isn’t out of the woods yet, especially if Brandon thinks he can lure Jim Harbaugh from the NFL for some reason.

Scott Shafer, Syracuse: Shafer and the Orange are in the same boat. They need three wins in their final four games to reach a bowl game. He’s only in his second season as head coach, but the sense is there’s plenty going on in the background here.

Paul Rhoads, Iowa State: Three ranked teams in their final five games means the Cyclones likely aren’t going to a bowl game. Is that enough for the Cyclones to make a change?

Paul Haynes, Kent State: Kent State has one win this season. It doesn’t look good for a second. Will the folks in Kent, Ohio, get impatient with Haynes, in his second year?

Derek Mason, Vanderbilt: Again, no chatter. But he’s one to track if things get really bad, and they could. Next week the Commodores face Old Dominion, a team with an incredible offense. Lose that game and there could be real questions about Mason’s future. Remember — Southern Miss fired Ellis Johnson after one season. USM went 0-12 that year.

Scott Satterfield, Appalachian State: Conceivably they could end up with a winning season at 2-5, but the Mountaineers probably won’t. That would be two straight losing seasons. The transition to FBS will probably by Satterfield one more year.

Paul Petrino, Idaho: After I wrote this two weeks ago Idaho won its first game of the season. Petrino’s future, as I wrote two weeks ago, comes down to whether the fan base and athletic department is impatient with him and I don’t get that sense based on what I’ve read.

Frank Beamer, Virginia Tech: He’s an institution in Blacksburg, but how long does he survive? This isn’t a Top 10 program anymore. Yes they beat Ohio State, but the timing was right as they caught the Buckeyes early as they were transitioning to quarterback T.J. Barrett. Since then they’ve lost four games. He led the Hokies to eight straight double-digit win seasons from 2004-11 before the program took a dropoff. Sounds familiar, Texas fans? Mack Brown showed that no coach is safe. The fans in Blacksburg are restless, based on reports coming out of that area. I’m not sure getting to a bowl game helps Beamer this year.