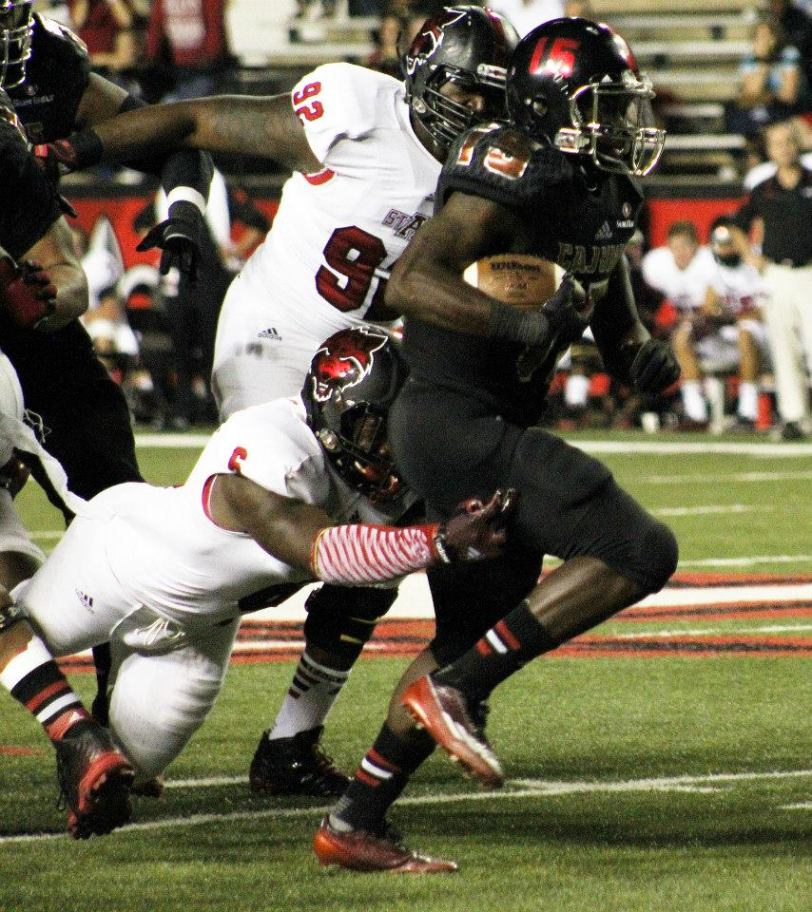 Louisiana running back Elijah McGuire (right) runs away from a pair of Arkansas State defenders during their game in Lafayette, La., on Oct. 21, 2014. (RoadTripSports photo by Matthew Postins)

Arkansas State, Louisiana, Memphis, Nevada, Rice and Utah State are all now eligible to play in a bowl game, bringing the season total to 52 teams. There are four spots in the first College Football Playoff and 72 spots in the remaining 36 bowl games. That means 24 more teams need to get to six in the last few weeks of the season.

American Athletic Conference – Memphis, of all teams, became just the second AAC squad to reach six wins this season by knocking off Temple, 16-13, to improve to 6-3 on the year. That’s quite an accomplishment for a program that had not won more than four games since 2008, which is also the last time the Tigers went bowling. Cincinnati, Houston, Temple and UCF are all sitting on five victories. Houston has a bye this week, but the other three teams could all get to six on Saturday. The AAC has six bowl tie-ins.

Atlantic Coast Conference – There was no change in the ACC this week. NC State had a chance to get to six wins but instead got drilled, 56-23, by Georgia Tech. The Wolfpack should get there on Saturday with a game against 2-7 Wake Forest. However, no other team in the conference has even reached five wins. The ACC has nine bowl tie-ins.

Big 12 Conference – Just like the ACC, the Big 12 stayed the same this week. Texas upset West Virginia to join Oklahoma State at five wins. Those two teams face each other in Stillwater on Saturday, so one of them will become bowl-eligible along with Baylor, Kansas State, Oklahoma, TCU and West Virginia. The Big 12 has seven tie-ins.

Big Ten Conference – The conference had no movement this week. Do you see a pattern forming here? Michigan and Penn State got to five wins last week with a pair of ugly wins. The Wolverines held off Northwestern, 10-9, while the Nittany Lions beat Indiana, 13-7. Rutgers also has five victories. Michigan is off this week, but Penn State and Rutgers can both get to six on Saturday. So far, the Big Ten has seven bowl-eligible teams with 10 bowl tie-ins.

Conference USA – The feisty night birds of Rice became the third team in the conference to get to six wins and become bowl-eligible and join Louisiana Tech and Marshall. The Owls beat UTSA, 17-7, for their sixth straight win after starting the season 0-3. Middle Tennessee, UAB and UTEP all have five wins, although the Blue Raiders are the only one of those three with a game this week. CUSA has six bowl tie-ins.

Independents – Notre Dame is remains the only independent team to have reached six wins, while BYU has five, Navy four and Army three victories.

Mid-American Conference – There was no change in the MAC this week after the conference got to its five bowl tie-ins early last week. Ohio is the only remaining team in the conference that has reached five wins. The Bobcats are off this week.

Mountain West Conference – Utah State became bowl-eligible last week by knocking off Wyoming, 20-3, giving the MWC five teams with at least six victories. It was the seventh win of the year for the Aggies, who have a 13-game slate. San Diego State is the only other team in the conference with five wins. The Aztecs are at Boise State Saturday night. The MWC has seven bowl tie-ins.

Pacific-12 Conference – The Pac-12 was yet another conference with no changes in bowl-eligible teams this week. Five of the six teams in the South Division (Arizona, Arizona State, UCLA, USC and Utah) and Oregon have all reached six wins. Washington has six wins but needs one more to become bowl-eligible because of its 13-game schedule. Cal and Stanford are sitting at five wins. In theory, all three of those teams could be bowl-eligible this week. Cal is at USC, while Washington is at Arizona and Stanford plays host to Utah. The Pac-12 has seven bowl tie-ins.

Southeastern Conference – No SEC teams reached six wins this week, leaving the conference’s number of bowl-eligible teams at eight. Florida and Kentucky both have five wins. The Gators play host to South Carolina on Saturday, while the Wildcats are at Tennessee. The SEC has 10 bowl tie-ins.