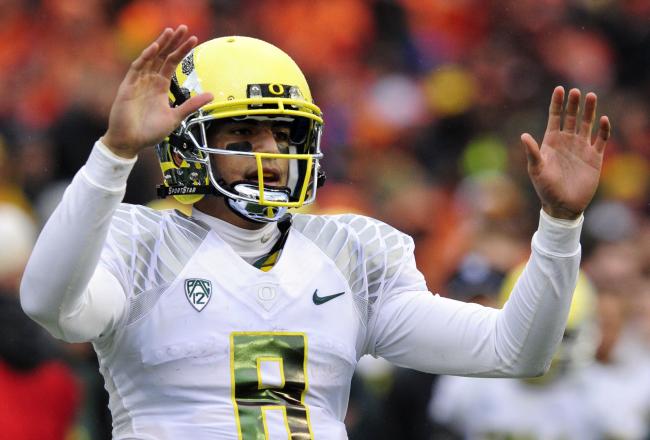 In College Football America, our preview publication, I wrote about the Heisman frontrunners and sleepers, from my perspective. Seven weeks into the season we start to see who the legitimate candidates are and the ones that are on the outside. I’ll be back in a few weeks with a new update.

In a couple of days the Heisman Trophy finalists will be announced, so my weekly Heisman piece will hit the street a little earlier than usual. I don’t have a Heisman vote, but I have been writing about the race all year for College Football America. Last week I whittled down my Top 5 to a Top 3, and I feel quite confident those three players will be in New York City next weekend. But there’s a new addition to my mythical ballot, but it’s a familiar face.

So then, who wins? If I had a vote, this is how my Heisman ballot would look:

First: QB Marcus Mariota, Oregon: Statistically, Mariota has had a fantastic year. He’s thrown for 3,783 yards, 38 touchdowns and a microscopic two interceptions. He’s also rushed for 669 yards and 14 touchdowns. Unlike last year he remained healthy and made every start. He avenged his team’s only loss in smashing fashion in the Pac 12 Championship game, throwing for 313 yards and two touchdowns and rushing for another 33 yards and three touchdowns. So he has more than 4,400 total yards and 52 total touchdowns. He plays for a team that can make a case for being the nation’s No. 1 team. And he has all the momentum. I have no problem making him the No. 1 player on my mythical ballot.

Last thing — in three seasons as a starter at Oregon Mariota has thrown 12 career interceptions. Unbelievable.

Second: WR Amari Cooper, Alabama: The past two games Cooper has made a significant push in huge national games. He caught 13 passes for 224 yards and three scores against Auburn in the Iron Bowl, a game that cemented, at least for me, that Cooper would be in New York City. Then in the SEC title game he caught 12 passes for 83 yards. He didn’t score, but he had a huge impact on the game. Cooper broke the SEC record for receptions with 115, to go along with 1,656 yards and 14 touchdowns. Let me rephrase that — an Alabama wide receiver under head coach Nick Saban had more than 100 receptions for the season with an untested starting quarterback. Cooper’s talent level is huge. He’s going to win every receiver award out there this season. He’ll even leapfrog Gordon on my ballot because it’s rare for a pure receiver, with no hand in the return game, gets this close to the final ballot.

Third: RB Melvin Gordon, Wisconsin: I feel somewhat bad for Gordon, as he’s had a tremendous year. But thanks to a stingy Ohio State defense he wasn’t able to finish off the deal. He rushed for just 76 yards in the Big Ten title game. Gordon did have a whale of a 2014, rushing for 2,336 yards and scoring 26 touchdowns. When I saw him in person last year against Illinois I knew I was watching a special player. But Cooper moves ahead of Gordon on my ballot for one simple reason — Cooper helped propel his team into the College Football Playoff and Gordon was not able to do the same, nor were he and the Badgers able to spoil Ohio State’s run to the CFP. That’s not necessarily Gordon’s fault. It’s just a fact now that the regular season is over.

Fourth: QB Trevone Boykin, TCU: I was in Fort Worth for the Iowa State game and he reminded me why he was a candidate — 460 yards passing and four touchdowns, along with his first collegiate touchdown reception. For the season Boykin threw for 3,714 yards, 30 touchdowns and seven interceptions, and rushed for 642 yards and eight touchdowns. His numbers are pretty comparable to Mariota’s, but Mariota threw fewer interceptions, avenged his only loss and was more consistent throughout the season than Boykin. Still, Boykin doesn’t feel like a player that will leave early for the NFL and going to New York City gives him a taste of what could come in 2015. But, without looking ahead, I see Boykin as the nation’s fourth-best player and worthy of being on my mythical ballot.