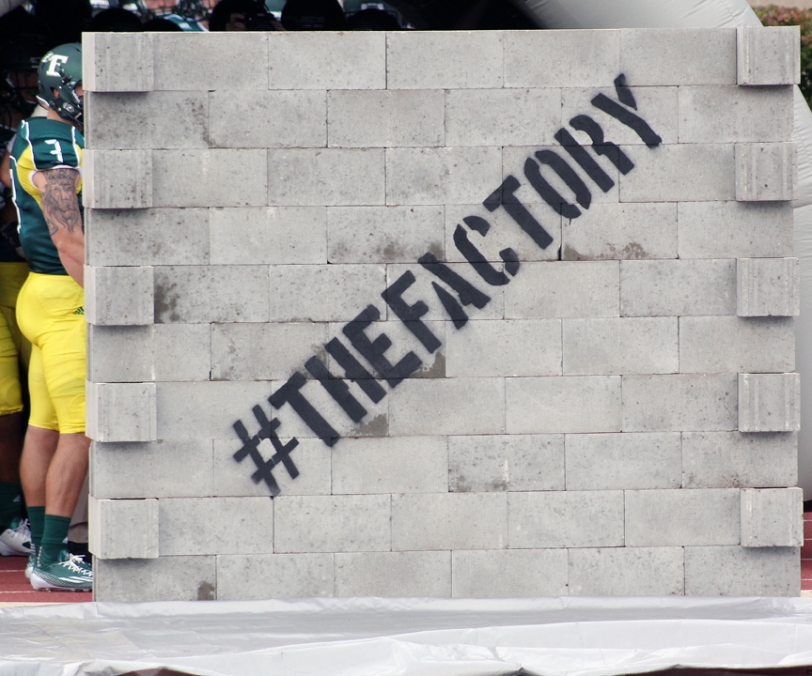 Eastern Michigan players break through this wall before each game at Rynearson Stadium in Ypsilanti, Mich. (RoadTripSports photo by Matthew Postins)

YPSILANTI, Mich. – Ray Lawry scored on a 45-yard run, his fourth of the game, with 1:57 left in the fourth quarter to lift Old Dominion University football over Eastern Michigan 38-34 Saturday evening at Eastern Michigan.

With just under nine minutes left in the game, EMU kicker Dylan Mulder connected on a 52-yard field goal to give the Eagles a 34-31 lead.

With 3:02 to play in the game the Monarchs got the ball back after a defensive stop. Shuler Bentley hit Nick England in the seam for 30 yards and three plays Lawry burst through the middle to give the Monarchs their first lead of the game at 38-34.

In the ensuing possession, EMU drove to the ODU 40 but on fourth and six Tim Ward intercepted Brogan Roback to clinch the victory.

The Eagles held a 17-10 halftime lead and pushed the lead to 24-10 on the opening drive of the second half as Reginald Bell hit Dustin Creel for a 10-yard touchdown pass.