Tennessee is FWAA National Team of the Week

By Matthew Postins September 28, 2016 FWAA Team of the Week 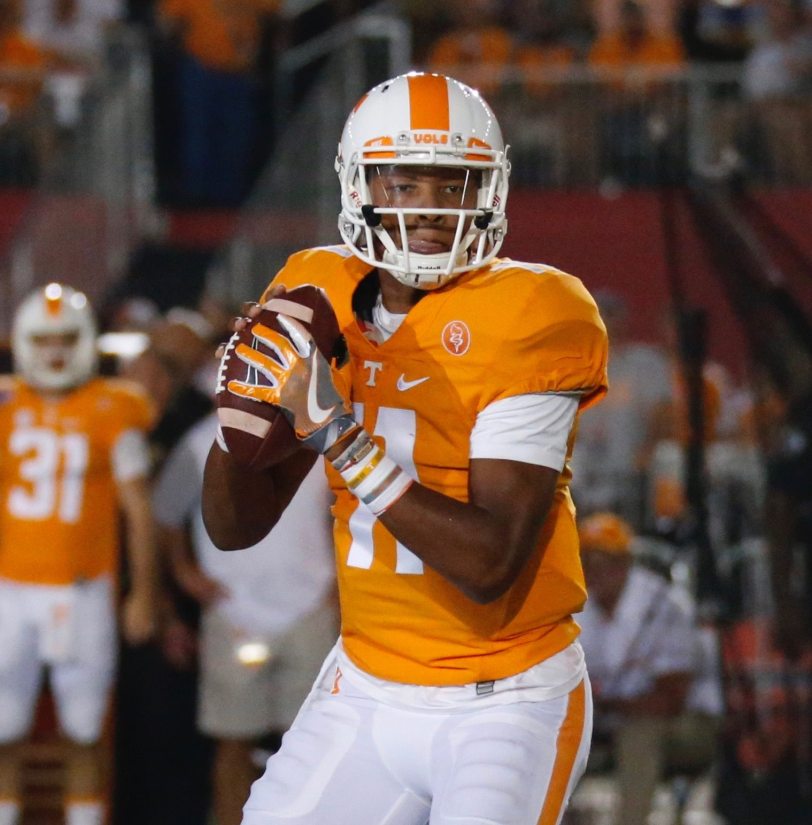 DALLAS (FWAA) – Quarterback Joshua Dobbs was responsible for five touchdowns and led a furious rally as the Tennessee Volunteers came back from a 21-0 deficit to defeat Florida, 38-28, last Saturday. For ending an 11-game losing streak to the Gators, the Vols earned the Football Writers Association of America National Team of the Week honor for games of the weekend of Sept. 24.

The announcement was made on “Playbook,” hosted by Chris Carlin and Gino Torretta on SiriusXM Radio’s “College Sports Nation.” Each Monday during the season, the FWAA National Team of the Week will be unveiled during the program, which airs from 1-4 p.m. ET.

Tennessee, 4-0 for the first time since 2003, scored 38 straight points behind Dobbs, who brushed off a cold start to complete 16-of-32 passes for 319 yards and four touchdowns, while also gaining 80 yards and a touchdown on 17 carries. Jalen Hurd added 95 yards on 26 carries. The Vols’ defense held Florida to 106 yards on the ground.

“I hope you guys understand the resolve and the resiliency of this football team,” Head Coach Butch Jones said. “Must win, all that – that is not the case. We are building something special here with character and competitiveness. The resolve of these kids, with all the expectations on this football game and you go down at halftime, and to have that second half performance. If you don’t have character in your football program, that does not happen.”

The win was the Volunteers’ first in their Southeastern Conference opener since 2004, when they also defeated the Gators to open conference play. Tennessee now owns a 10-game win streak dating back to 2015, which ranks as the third-longest in the nation and is the Vols’ longest since winning 14 straight spanning the 1998 and 1999 seasons.

This is the second time for Tennessee to earn National Team of the Week honors. The other came in 2006.

Other National Team of the Week nominees for the weekend of Sept. 23 included:

• Colorado (3-1): Steven Montez recorded the first 300-yard passing/100-yard rushing game in school history (333 and 135, respectively), and Colorado held off an Oregon rally with an interception in its own end zone by Ahkello Witherspoon in the final minute to earn a signature road win in its Pac-12 Conference opener.

• Wisconsin (4-0): The Badgers turned an early-season showdown at Michigan State into a 30-6 runaway, paced by a 66-yard fumble recovery that safety Leo Musso returned for a touchdown, sparking a 17-0 scoring run in the third-quarter.

The Football Writers Association of America has named a national team of the week since the 2002 season. Members of the 12-person FWAA All-America Committee – plus one fan vote from Twitter – decide the weekly honor.

Founded in 1941, the Football Writers Association of America consists of 1,400 men and women who cover college football. The membership includes journalists, broadcasters and publicists, as well as key executives in all the areas that involve the game. The FWAA works to govern areas that include game-day operations, major awards and its annual All-America team. For more information about the FWAA and its award programs, contact Steve Richardson at tiger@fwaa.com.