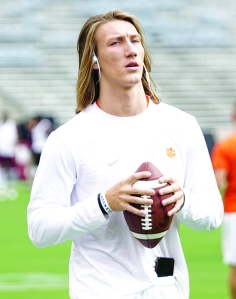 Clemson QB Trevor Lawrence is on the cover of the 2019 College Football America Yearbook. (Photo by Chuck Cox/RoadTripSports.com)

NASHVILLE, Tenn. — RoadTripSports.com is proud to announce the release of the 2019 edition of the College Football America Yearbook, an annual publication that previews every conference at every level of college football in the United States and Canada.

The eighth annual print edition is available via Amazon.com and BarnesandNoble.com.

“Counting high school games, bowl games and all-star games, our staff attended more than 70 football games in 2018,” says Kendall Webb, the publisher of the College Football America Yearbook. “Then, like we always do, we spent the spring sorting it all out and preparing the latest edition of the yearbook.

“I honestly believe it’s the best yearbook we’ve ever released, and we’re all excited to get it out there in the market and in the hands of college football fans.”

The College Football America Yearbook is published independently by Webb, with Matthew Postins serving as the publication’s editor-in-chief. Chuck Cox, meanwhile, assists as the director of editorial content. All of the publication’s staff members are members of the Football Writers Association of America, and collectively serve on the selection committees for several of college football’s major postseason awards.

This year’s book features Clemson quarterback Trevor Lawrence on the cover. Lawrence led the Tigers to a second national title in three seasons in 2018.

Some of the features in the 260-page publication include:

The Heisman Race: A look at the front-runners and dark horses for college football’s most prestigious award in 2018.

Schedules and Results: 2019 schedules and 2018 results for every college football team in the United States, including all NCAA, NAIA, NCCAA, USCAA, NJCAA and CCCAA programs.

Additionally, the College Football America Yearbook previews all of the conferences at every level in the United States, along with the four conferences of Canada’s U Sports. The yearbook also provides updates of Mexico’s CONADEIP and ONEFA leagues.