Today you’ll find an excerpt from our FBS preview below, written by Kendall Webb:

Alabama and Clemson have met in each of the past four playoffs, with three of those meetings coming in the championship game. They’ve each won two national titles in that span, with both of Clemson’s wins coming against Alabama in the past three years, including the 2016 title when the Tigers slipped by the Crimson Tide for a 35-31 win. That came one year after another classic when the Tide edged the Tigers, 45-40. The other meeting came in the 2017 semifinals when Alabama poured it on Clemson in a 24-6 win. 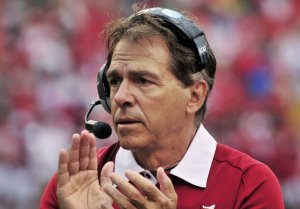 So Alabama-Clemson is the storyline in major college football these days, and there’s no reason to expect it will be different in 2019. Alabama’s reign under Nick Saban is already acknowledged as a dynasty with five national titles in a nine-year span from 2009-17. Another Clemson national championship this fall would be the Tigers’ third in four years, and we would have another dynasty officially under way led by Clemson head coach Dabo Swinney.

Whether it would simultaneously mark the end of the Alabama dynasty is something we won’t know for quite some time because another Crimson Tide title anywhere in the near future would keep their own claims to a dynasty alive. Suffice it to say, college football has rarely experienced a dynamic like the two-headed monster of Alabama and Clemson, with only the NCAA Division III rivalry between Mount Union and Wisconsin-Whitewater providing any context.

Clemson QB Trevor Lawrence is on the cover of the 2019 College Football America Yearbook. (Photo by Chuck Cox/RoadTripSports.com)

Need more? Webb delves further into this recent rivalry, why both teams could win it all again and which FBS programs could crash the party. Plus, we preview every conference and have capsules for all 130 FBS teams, including 2018 results, 2019 schedules, a Starting Lineup for each conference and stadium photos from our travels to each of these 130 stadiums. Plus, there are photos of players like Clemson quarterback Trevor Lawrence, who happens to be on the cover of the Yearbook.