Today you’ll find an excerpt from our FCS preview below, written by Matthew Postins:

After (Chris) Klieman took the K-State job, the Bison promoted their defensive coordinator, Matt Entz, to head coach. The long-time assistant — who took over the DC role after Klieman was promoted to head coach — inherits the crown jewel of FCS football. No program has more national titles (7) in FCS history. No program has more expectations attached to it than the Bison. 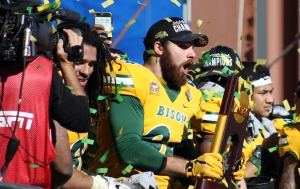 The North Dakota State Bison are the No. 1 team in the 2019 College Football America Yearbook FCS preseason Top 30. (RoadTripSports.com photo by Matthew Postins)

This time the Bison lose 24 seniors, including QB Easton Stick, RB Bruce Anderson, WR Darrius Shepherd and DE Greg Menard, among others. The Bison are working to find Stick’s replacement, but they have two All-Americans to build around in OL Zack Johnson and LB Jabril Cox.

From there, Postins outlines the rest of the reasons why the FCS champ could come out of the Missouri Valley Football Conference, which teams around the country could challenge the Bison and what changes are happening at the FCS level. Plus, we preview every conference and have capsules for all 126 FCS teams, including 2018 results and 2019 schedules. Plus, there are photos of players like North Dakota State running back Ty Brooks, who happens to be on our FCS section cover. 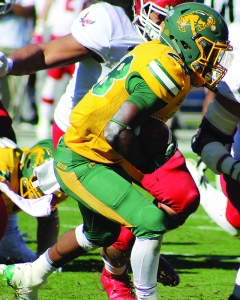