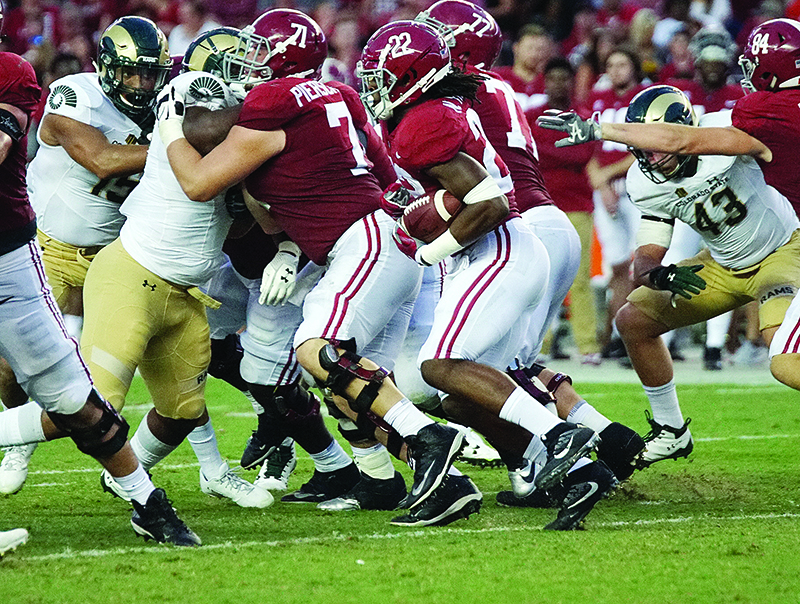 Najee Harris (22) is in line to become Alabama’s top back in 2019 as the Crimson Tide seek to keep their era of SEC dominance alive. (RoadTripSports file photo by Chuck Cox)

For the next several days we are providing excerpts from our FBS conference previews.

Today you’ll find an excerpt from our Southeastern Conference preview below, written by Kendall Webb:

The Alabama Crimson Tide have competed in all five College Football Playoffs to date, and the Tide is loaded again with a Heisman candidate at quarterback in junior Tua Tagovailoa and, arguably, a second at wide receiver in Jerry Jeudy. With two recent Heisman winners at running back (Mark Ingram Jr. and Derrick Henry), it wouldn’t be surprising if junior Najee Harris emerged to throw his hat in the ring, too. Preseason All-America guard Alex Leatherwood and tackle Jedrick Wills Jr. will lead another dominant offensive line. The defense, meanwhile, has its own trio earning raves with preseason All-Americans at defensive end (Raekwon Davis), linebacker (Dylan Moses) and safety (Xavier McKinney).

Need more? Webb admits the rest of the SEC West Division has a hill to climb, but examines how LSU might be the best equipped to do it. In the East Division, he examines Georgia’s chances of leaping back into the SEC title, and for that matter, College Football Playoff, discussion.

The SEC preview includes all 2018 results, all 2019 schedules, a 2019 conference Starting Lineup, a Gameday Experience recap of Texas A&M’s Kyle Field and photos of each stadium from our travels around the conference.